“If he is so heartless than why shouldn’t we be?” - Young Hart Crane (Dave Franco) 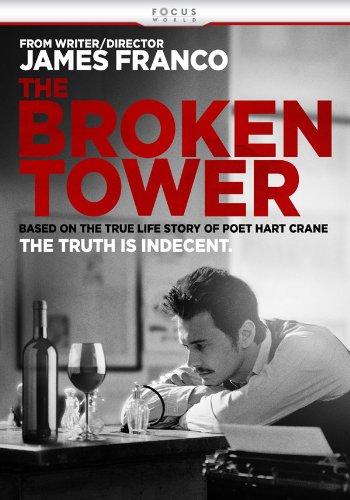 James Franco went right from a Best Actor Oscar nomination to the director's chair for this true story of Poet, Hart Crane. Here's hoping it's at least a little more engaging than his acting turn as Allen Ginsberg a few years ago.

It’s certainly been a whirlwind of a last few years for young actor James Franco. After transforming from a rising young talent to a bona fide acting star overnight, thanks in large part to a Best Actor Oscar nomination for 127 Hours, Franco fell out of favor with many of his new (READ: bandwagon) fans following what many saw as an uninspired performance as co-host of the 2011 Academy Awards telecast. His rough year continued with a starring role in the surprisingly bad David Gordon Green comedy, Your Highness, but he rebounded with the summer hit, Rise of the Planet of the Apes, albeit relegated to an afterthought to that film’s awesome ape special effects. Amidst the craziness, Franco saw his latest directorial effort, The Broken Tower premiere at the Los Angeles Film Festival, then disappear from the festival and art house circuit until finally reappearing on Video on Demand in January of 2012. Now, Franco’s challenging look at American poet Hart Crane, can finally be consumed by the masses at it makes its DVD debut thanks to Entertainment One Home Video and Focus World.

Hart Crane (James Franco) was an influential modernist poet, best known for his extremely stylized, ambitious work, The Bridge. Growing up as a young boy (James’ brother Dave Franco plays the younger Crane) in Garrettsville, Ohio, Hart was highly influenced by the writings of T.S. Eliot, making it his goal to eventually write something as epic as The Waste Land. Openly homosexual in the 1930s, Crane faced many a challenge in his far too brief life, and took many a lover, never restraining from sleeping with a different man every night, whether it be a local worker or a sailor that just got off his ship. Crane’s life was, indeed, a short, often tumultuous one, but his poetry continues to live on.

Those who were instantly turned off by Franco’s shenanigans last year probably won’t change your opinion of him after watching The Broken Tower. Basically an extremely artsy, experimental vanity project, the film not only features only a couple of scenes without Franco dominating the frame, but the ways in which he tackles the subject matter as a director won’t exactly win over his detractors either. Fortunately, if you have even a slightly open mind about Franco, the actor and filmmaker, you might see things as I saw them, and enjoy his latest directorial effort as what it is, a bold, genuine look at a real-life, often underappreciated poet who still haunts the very streets we see in the film. Sure, many people aren’t up for black & white films that feature a single shot of an actor reading poetry for long stretches, but that would be the case regardless of the actor/filmmaker involved. For those of us with a penchant for such things, however, this is a prime example of the right way to make a biopic these days, fresh, original, and daring.

Not to sound like a prude or anything, but it’s only fair to warn unsuspecting viewers that The Broken Tower contains an extremely graphic sex scene early on that recalls a similar sequence in the infamous Vincent Gallo film, The Brown Bunny. While this particular scene is much shorter (no pun intended) than Gallo’s, it’s still just as jarring. Once you get over the initial shock, however, it becomes clear that such a sequence has more than done its job in establishing just how debaucherous Hart Crane could be. While, it’s certainly possible that such behavior did lead to his early demise, it’s also clear that Crane’s amazingly sincere poetry is a direct byproduct of his complex, far-from-wholesome lifestyle. Acting-wise, this is James Franco’s film from beginning to end. Many might unfairly deem it a vanity project, and such a distinction is difficult to argue, given the fact that he’s both behind and in front of the camera at all times. Instead, it should be seen as a love letter to Hart Crane. Sure, Franco isn’t the only young actor that could have played Crane, but it’s clear that his directorial vision is directly linked to his embodiment of the poet. The rest of the cast is basically relegated to the background, but one actor, the always phenomenal, Michael Shannon, does an amazing job with the little screen time he has. He plays one of Hart Crane’s lovers, Emile, and he brings that same sense of danger and foreboding to this character as he has to each and every role he’s played. Shannon might not be an integral part of The Broken Tower, but he’s as unforgettable as ever here.

Entertainment One’s DVD is a solid effort, presenting Franco’s film with an excellent 1.78:1 anamorphic widescreen video transfer and a solid Dolby Digital 5.1 mix that mostly stays up front, but does utilize some directional effects from time-to-time. The DVD’s extras include a very informative and entertaining audio commentary track with James Franco, producer Vince Jolivette, and cinematographer Christina Voros. There’s also a 48-minute piece exploring the life of Hart Crane via interviews with James Franco and three renown poets and literary scholars, as well as the theatrical trailer for The Broken Tower.