“You don’t have to spend every day of your life proving your honesty, but I do.” - John Robie (Cary Grant) 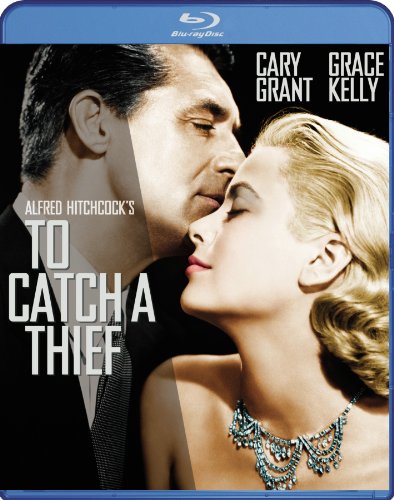 The latest in the recent wave of Alfred Hitchcock films to hit Blu-ray, this one simply has to be seen for the pairing of Cary Grant and Grace Kelly alone.

The “Master of Suspense,” Alfred Hitchcock, truly earned such a moniker with each and every movie he made. From The Birds to North By Northwest to, arguably, his masterpiece, Psycho, Hitch changed cinema with each subsequent, revolutionary new idea he brought to the horror/suspense genre. He also occasionally strayed from the creepy, all-out-thriller-type films and made more straightforward, albeit still edgy fare. One such excursion is 1955’s To Catch a Thief, a film whose main selling point was the dream pairing of mega-stars Grace Kelly and Cary Grant. This is much more than just a vehicle for its two stars, though, as Hitchcock has made an early version of what today might be considered an “art house film,” (it won the Oscar for Best Cinematography the following year) with a tinge of James Bond-style action and espionage to please the masses. To Catch a Thief comes to Blu-ray courtesy of Paramount, in an impressive package complete with an amazing new 1080p high-definition transfer, and an extras collection that’s sure to please Hitchcock fans everywhere.

John Robie (Cary Grant) is in the wrong place at the wrong time…or is he? A recent rash of jewelry thefts is giving the French Riviera a bad name, and, Robie, a once-heralded thief among thieves, is a prime suspect. After narrowly escaping the local authorities, he seeks refuge with old friend and restaurateur, Bertani (Charles Vanel), but it isn’t long before the police are raiding Robie’s latest location. After narrowly escaping again, this time thanks in large part to a former lover, the young, French, Danielle (Brigitte Auber), Robie decides that the only way to beat this rap is to take matters into his own hand and find the real thief himself. In order to accomplish such a feat, he gets a list of clients with jewelry worth stealing from an insurance agent named H.H. Hughson (John Williams), and it isn’t long before Robie closely acquaints himself with Jessie Stevens (Jessie Royce Landis) and her beautiful daughter, Francie (Grace Kelly). A budding romance ensues between Robie and Francie, but he’s determined to stay the course, bring the real thief to justice, and clear his name.

Hitchcock’s signature spectacularly-written dialogue is a staple of To Catch a Thief, and Cary Grant and Grace Kelly deliver it magnificently. Kelly is beautiful and charming, but this is clearly Grant at his finest. He is the epitome of cool, crafting Robie as a super sly, almost invincible man initially, then gradually becoming an almost sympathetic character who wants nothing more than to prove his innocence. Grant shows great range throughout, but regardless of what a particular sequence asks of him, he always maintains an air of machismo that was tough to beat during his era. The rest of the cast is solid, with Vanel as Bertain, and Williams as Hughson being particularly memorable, but no one even comes close to touching what Grant is doing here. Of course, be on the lookout, early on, for Hitchcock’s trademark cameo, and a memorable one it is, at that.

The opening chase sequence is simply breathtaking, highlighted by a sprawling series of aerial shots that show the pursuer and the pursued as they wind their way through the curvy, often treacherous streets surrounding the French Riviera. Despite this magnificent opening, To Catch a Thief is more James Bond than Alfred Hitchcock; full of witty dialogue from the leading man, beautiful women, and a handful of intense action sequences. While a lack of nifty gadgets and actual spies keeps Hitchcock from going “full Bond” on us, it’s clear that he’s at least a bit out of his element. The good news is, new filmmaking approach only opens our eyes to just how wonderfully diverse of a filmmaker Hitchcock was. He made movies at such a rapid pace that it would have been easy for him to settle into a single genre and style and simply pump out hit after hit. If he had settled for such complacency, we might never have experienced To Catch a Thief, a film that truly belongs in the conversation regarding Alfred Hitchcock’s masterworks.

Paramount’s new Blu-ray edition of To Catch a Thief features the film in a spectacular, new 1.78:1 1080p high- definition presentation that represents the best the film has ever looked on home video. You’d hardly know from this transfer that the film is nearly 60-years-old, thanks to exquisite image detail throughout and a simply gorgeous, vibrant color scheme. The age of the source material does yield some grain and dirt on a handful of occasions, but these few instances are never distracting. The lossless 2.0 Dolby TrueHD audio will do nothing to even come close to knocking your socks off, but it’s perfectly suited for the film. Things sound a little too confined at times, but there’s never really any call for an overabundance of directional effects or more dynamic range. What’s always impressive is the crisp, clear dialogue, which blends perfectly with the rest of the mix. A healthy collection of extra features is on board, including a rather stiff audio commentary track with Hitchcock Film Historian, Drew Casper, and a nice piece with two members of the Hitchcock family and a group of USC students, an event moderated by Casper. Another seven featurettes are here, all focusing on various aspects of the film’s production and Hitchcock’s career, with a series of Galleries, and the Theatrical Trailer for To Catch a Thief rounding out another very impressive catalog release on Paramount Blu-ray.