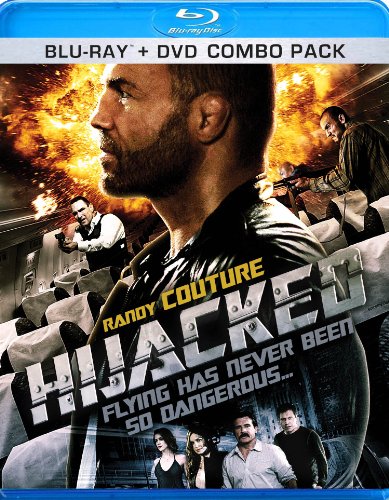 BEVERLY HILLS, CA - Get ready to fly the unfriendly skies! Anchor Bay Films is proud to announce the release of Hijacked

coming to Blu-ray(TM) Combo Pack and DVD on July 31st. A high-octane, pulse-pounding story of one man out for justice in the sky, Hijacked

Special Agent Ross's (Couture) plans to reconcile with his ex-fiance are ruined when she boards a private jet that is targeted by hijackers working for the same crime lord he is chasing. With no time to inform his team, Ross wriggles his way aboard the aircraft and risks it all to save the love of his life. An adrenaline fueled action packed film that puts the fear back in flying!

Much like other exciting terror in the sky classics, such as Delta Force and Executive Decision, Hijacked

is an unforgettable no-holds-barred thriller that pulls no punches and will have audiences guessing until the very end. SRP is $29.99 for the Blu-ray(TM)Combo Pack and $26.98 for DVD. Pre-book is July 4, 2012.

About Anchor Bay Films
Anchor Bay Films is unique in that it offers the creative community a fully integrated distribution capability on all platforms and an international solution extending beyond the U.S. Anchor Bay Films is a division of Anchor Bay Entertainment and is on the ground providing quality distribution with operations in the U.S., United Kingdom, Canada and Australia, as well as distribution capabilities in other key territories. The company focuses on a platform release strategy for its films with an eye toward maximizing their potential across all ancillary distribution platforms. Recent and upcoming releases include Seeking Justice starring Nicolas Cage, January Jones and Guy Pearce on March 18th and Touchback starring Brian Presley on April 13th. Films in its library include the critically-acclaimed comedy City Island starring Andy Garcia and Solitary Man starring Michael Douglas as well as the 2011 releases of Kill the Irishman starring Ray Stevenson, Vincent D'Onofrio, Val Kilmer and Christopher Walken, Toronto Film Festival award-winner Beautiful Boy with Maria Bello and Michael Sheen and Cannes 2011 premiere Corman's World. Anchor Bay Entertainment is a subsidiary of Starz Media, LLC (www.starzmedia.com) which is an operating unit of Starz, LLC, a wholly-owned subsidiary of Liberty Media Corporation.