DVD Review: WORRIED ABOUT THE BOY 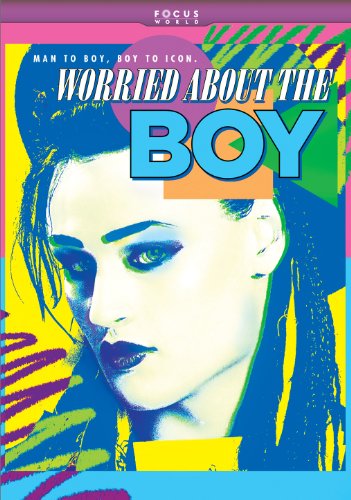 While I'm not sure the masses were clamoring for a biopic about the infamous lead singer of 80s Pop group Culture Club, this flick promises to tell us everything we ever wanted to know about Boy George, and then some.

I know youÆre all thinking the same thing I am: ōFinally, the Boy George biopic weÆve been waiting for since the 80s!!ö Ok, so no one (myself included) is actually thinking such a thing, but, regardless, said thing now exists in the form of 2010Æs Worried About the Boy. Directed by Julian Jarrold (Kinky Boots, Becoming Jane), the film was originally made for British television, premiering on the BBC back in 2010. ItÆs finally made its way stateside, coming to us via Entertainment One, and, while it likely wonÆt spark a sudden rush on Culture Club CDs, this fine film will still shed some light on the enigmatic 80s pop star that is Boy George.

George OÆDowd (Douglas Booth) is your typical rebellious, English teenager, clashing with his parents and hanging out with a bad crowd. Things change when he takes a job in a cloakroom with the blessing of his equally rebellious friend, Peter (Freddie Fox), who tends to dress like Marilyn Monroe. GeorgeÆs new job opens doors for him in the music world as he meets the eventual drummer of Culture Club, Jon Moss (Mathew Horne), whom he instantly has a crush on. GeorgeÆs pre-Culture Club dabbling in the music business also includes a short-lived (he was fired) stint in the band Bow Wow Wow, but it all culminates in Culture ClubÆs debut on the Top of the Pops TV show in 1982, where the iconic Boy George was revealed to the masses.

While certainly not nearly as compelling as similar biopics like Control or even Sid & Nancy, JarroldÆs film is surprisingly engaging and even quite touching at times. Featuring higher production values than any American TV movies not-on-HBO can even come close to, this slick-looking portrayal of 80s London paints what I assume is an authentic portrait of the era. In an interesting approach to the material, we rarely see George appear in the clothing and make-up that fans of Culture Club and 80s music in general are so used to. This effectively humanizes the man rather than the icon, making Worried About the Boy all the more compelling.

JarroldÆs film wouldnÆt work half as well without Booth dominating the screen time. This young actor is best known for his work on the TV series, The Pillars of the Earth, and his upcoming appearances in another adaptation of Romeo and Juliet as well as Darren AronofskyÆs next project, Noah, will surely have people talking soon enough. A look at his fantastic performance in Worried About the Boy should get the buzz going earlier than expected, as this is career-making stuff. The meatiest supporting role belongs to Mathew Horne, who plays the always cool, always under control, Jon Moss, which is a nice contrast to his well-known work on the BBC series Gavin & Stacey. The entire supporting cast does a fine job with their respective roles, but this is, first and foremost, BoothÆs film throughout.

Entertainment OneÆs DVD is a good disc with solid audio and video presentations. The anamorphic widescreen 1.78:1 video transfer features consistently sharp, detailed images, a color scheme that stays true to the storyÆs setting, and very few instances of grain or dirt. A Dolby Digital 2.0 audio mix is also good, doing a fine job utilizing the surround speakers to envelop us with the filmÆs great soundtrack. We only get a couple of extras, including the trailer for Worried About the Boy and a 10-minute featurette that gives us a behind-the-scenes look into the making of the film via cast and crew interviews along with on-set footage. ItÆs too bad there isnÆt more about the making of the film or about the real Boy George, but what we do have will have to suffice given the relative anonymity of the film to this point.