Boardwalk Empire was the winner of eight 2011 Emmy(R) Awards, including Outstanding Directing for a Drama Series (Martin Scorsese), and the 2011 Golden Globe(R) for Best Drama Series and Best Actor (Steve Buscemi). In season two, Nucky and his lieutenants appear to have solidified their hold on power by rigging an election and getting a crony elected mayor. 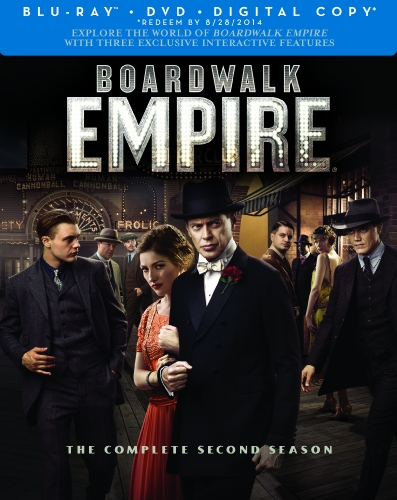 Though his fortunes have soared in the wake of Prohibition, Nucky Thompson is paying a steep price for wielding ultimate power in "the world's playground." Following the '20 election, Nucky finds himself the target of an investigation for voter fraud and faces not only jail, but insurrection by some of those he considered his closest allies. Boardwalk Empire: The Complete Second Season

releases on Blu-ray with HBO Select ($79.98), DVD ($59.99) and Digital Download on August 28, 2012. Blu-ray with HBO Select offers buyers the choice of three ways to watch in one set - Blu-ray, DVD and Digital Copy. Season one will also be available in the new format day and date with season two. The digital copy is redeemable via a provider of your choice: iTunes, Vudu or Amazon, as well as an UltraViolet copy through supporting providers.

Boardwalk Empire was the winner of eight 2011 Emmy(R) Awards, including Outstanding Directing for a Drama Series (Martin Scorsese), and the 2011 Golden Globe(R) for Best Drama Series and Best Actor (Steve Buscemi). In season two, Nucky and his lieutenants appear to have solidified their hold on power by rigging an election and getting a crony elected mayor. However, after a bloody KKK attack at Chalky White's bootleg warehouse, Nucky finds his hold on Atlantic City weakened, first by state agents who arrest him for election fraud, then by members of his own inner circle and even his family, who align against him. Meanwhile, mobsters like Arnold Rothstein, Lucky Luciano, Meyer Lansky and Al Capone wait in the wings, looking for the chance to grab a bigger piece of Nucky's pie.

Blu-ray Features (along with all DVD extras):
* Includes Blu-ray with HBO Select, DVD + Digital Copy
* "Living in 1921" - Look back in time and discover the styles, sounds and events that defined 1921 in this comprehensive, interactive guide.
* "Secrets of the Past: Storytelling in Episode 11" - Hear from the writers, cast members and crew of Boardwalk Empire in this enhanced, picture-in-picture feature as they reflect on season two and the pivotal episode "Under God's Power She Flourishes."
* Character Dossier - Track the major players of season two, from gangsters and rumrunners, to politicians and Prohees, with this interactive, in-feature character guide.

DVD Features:
* "Back to Boardwalk" - Revisit season one of Boardwalk Empire with creator/executive producer Terence Winter in this 15-minute recap.
* "The Money Decade" - Explore the legacy of the 1920s and get an inside look at the styles and trends that made the decade "roar."
* "Updates to the Boardwalk" - Production designer Bill Groom and creator/executive producer Terence Winter discuss the new sets of season two.
* Character Dossier - Track the major players of season two, from gangsters and rumrunners, to politicians and Prohees, with this evolving, comprehensive character guide.
* New Characters - Get acquainted with the two new major characters in season two: Owen Sleater and Manny Horvitz.
* Season Two Promo Spot - Written by creator/executive producer Terence Winter
* Audio Commentaries - Six audio commentaries with cast and crew including Terence Winter, Tim Van Patten, Howard Korder, Allen Coulter, Steve Buscemi, Jack Huston, Michael Kenneth Williams and Gretchen Mol.

About HBO Home Entertainment(R)
HBO Home Entertainment markets an extensive array of programs ranging from the critically-acclaimed and groundbreaking series The Sopranos(R), Sex and the City(R), True Blood(R) and Game of Thrones(R) to the multiple Emmy Award-winning mini-series The Pacific(R) and Band of Brothers(R). The company's catalog contains hundreds of titles including the Peabody Award-winning children's program Classical Baby, provocative programs from HBO Documentary Films including When the Levees Broke, innovative movies from HBO Films including Temple Grandin, and comedy specials featuring stand-up performers like Chris Rock and Ricky Gervais. The division distributes programs to the home entertainment market in three formats: Blu-ray, DVD, and digital download. Launched in 1984, HBO Home Entertainment has offices in New York, London and Toronto and the company's releases are marketed in over 70 countries around the world.