In Texas, we have what's called the Bubba Factor, where everyone is nicknamed Bubba. Except Ross Perot... they call him Mr. Bubba. - Bonnie Jean B.J. Poteet (Judith Ivey) 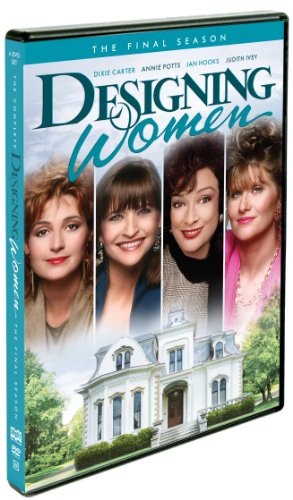 Designing Women, created by Linda-Bloodworth Thomason, was a very successful and unique situation comedy for its era with an almost completely female cast and a unique tone and perspective. Unfortunately most of the accolades pertained to the first five seasons of the show. Cast changes mixed up the chemistry of the show over its final two seasons and typically obtuse network decision making finalized its demise.

The seventh and final season remixed the case with the introduction of Judith Ivey as B.J. Poteet, a rich Texas widow who invests in the Sugarbaker firm after Allison Sugarbaker pulls her money out of the business for good. B.J. was presented as a friendly, outspoken and strong-willed woman with a zest for life and, unlike the other cast members, was completely capable of standing up to Julia. The previous season Delta Burke's character of Suzanne had moved to Japan and sold her part of the design business to her wealthy cousin Allison Sugarbaker (Julia Duffy). Another change had been the departure of Jean Smart, who was replaced by Jan Hooks as Carlene Dobber, Charlene's naive sister from hicksville Poplar Bluff. Smart's character, Charlene, moved to England to be with her husband and Carlene took over her job. Allison was a prim and proper conservative who provided a bossy foil to the liberal Julia. Despite series-high ratings, the changes were critically panned and some television pundits decided that the series had "jumped the shark". The Allison character proved unpopular with audiences and Duffy was let go at the end of one season.

Annie Potts announced in 1993 that she would leave the show after the seventh season, due to the fact that the producers dropped her character's proposed pregnancy storyline at the last minute; however, this turned out to be the show's last season, so there was no need for her character to be replaced.

However, these replacements could not stop the ratings slide which caused CBS to cancel the series in 1993. Of course, the classic television death decision to move the show from its previously successful Monday night time slot, following Murphy Brown, to the Friday night graveyard played a role. CBS had moved the show around early in its run and it almost got cancelled but protests from Viewers for Quality Television convinced the network to renew it. Another sign of problems is lack of involvement of the show creators. In the final two seasons, the director chores had been taken over by television veteran David Steinberg and Thomason wrote almost no episodes. The show got no series finale and concluded with an hour-long two-part, ironically named episode "Gone With a Whim" in which the principal characters imagine their lives as characters in Gone With The Wind.

The series' theme song was the Georgia state song "Georgia on My Mind", and was performed by Doc Severinsen early in the series run but Ray Charles' recording was used in the final two seasons. Meshach Taylor became a television regular as Anthony Bouvier, who consistently at the mercy of the ladies' antics during the entire seven-season run. He was nominated for an Emmy in 1989 as Outstanding Supporting Actor in a Comedy Series. Bernice Clifton was a character who endured through the entire run of the show and was portrayed by television and film character-acting legend Alice Ghostley. She received a nomination for Outstanding Supporting Actress in a Comedy Series for the 1992 season. Ghostley's career spanned almost 50 years. Look for Patrick Warburton in a hilarious turn as the dumb character Craig in three episodes, including the season ender.

A classic series experiences a classic case of series television decay. Character switches, creative departures and network missteps all add up for a recipe of implosion. Oddly these situations often create episodes that are fan favorites but usually it is a case of "what were they thinking?" (except the idea of keeping everybody employed for one more year.)