Abel Ferrara, one of American independent cinema's most distinctive artists, ventures into daring new territory in a story of people facing nothing less than the end of the world starring Willem Dafoe and Shanyn Leigh as New York artists facing their doom together.

ONE OF AMERICA'S MOST UNCOMPROMISING DIRECTORS, ABEL FERRARA, PRESENTS HIS MOST INTENSELY PERSONAL AND PROBING MOVIE YET 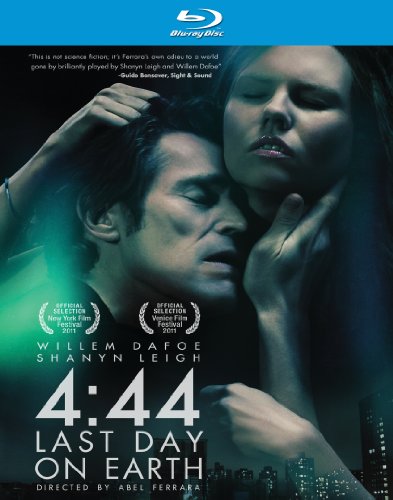 Abel Ferrara, one of American independent cinema's most distinctive artists, ventures into daring new territory in a story of people facing nothing less than the end of the world. 4:44 Last Days on Earth

, starring Willem Dafoe and Shanyn Leigh as New York artists facing their doom together, arrives on high-definition Blu-ray and DVD from IFC Films and MPI Media Group on July 17, 2012, with SRPs, respectively, of $29.98 and $24.98.

Tomorrow at 4:44 a.m., the world is going to come to an end, brought about by the destruction of the ozone layer. As panic hits the Earth's population, two lovers - actor and recovering drug addict Cisco (Oscar nominee Willem Dafoe of Antichrist, The Last Temptation Of Christ and Spider-Man) and painter Skye (Shanyn Leigh, Public Enemies) - seclude themselves in their Manhattan apartment to spend their last hours of existence together. Accepting their doomed fate, Cisco and Skye call their loved ones to say goodbye, they make love, they order Chinese takeout - and discover more about themselves and each other in a few short hours than most people do in an entire lifetime.

About IFC Entertainment
A leader in the independent film industry, IFC Entertainment consists of multiple brands that are devoted to bringing the best of specialty films to the largest possible audience: IFC Films, Festival Direct, IFC Productions, and the IFC Center. IFC Films is a leading distributor of independent film. Its unique day and date distribution model, 'IFC In Theaters,' makes independent films available to a national audience by releasing them simultaneously in theaters as well as on cable's On Demand platform and through Pay-Per-View, reaching 50 million homes. 'IFC Festival Direct' features a wide selection of titles acquired from major international film festivals and offers them exclusively through Video on Demand. IFC Productions is a feature film production company that provides financing for select independent film projects. IFC Center is a three screen, state-of-the-art cinema with luxurious seating and HD digital and 35mm projection that shows art-house films in the heart of New York's Greenwich Village. IFC Entertainment's companies are subsidiaries of Rainbow Media Holdings LLC.
Notice: Undefined variable: url in /home/hellawobo/public_html/digitallyobsessed.com/r-showreview.php on line 169