THE UPROARIOUS FISH-OUT-OF-WATER COMEDY FROM THE CREATORS AND STAR OF BORAT IS EVEN MORE OUTRAGEOUS IN AN UNCENSORED VERSION YOU COULDN'T SEE IN THEATERS!

Coming to Power on August 21, 2012, Blu-ray(TM)/DVD Combo Includes Both an Unrated and Theatrical Version, Plus Raucous Deleted Scenes and More Jaw-Dropping Bonus Content 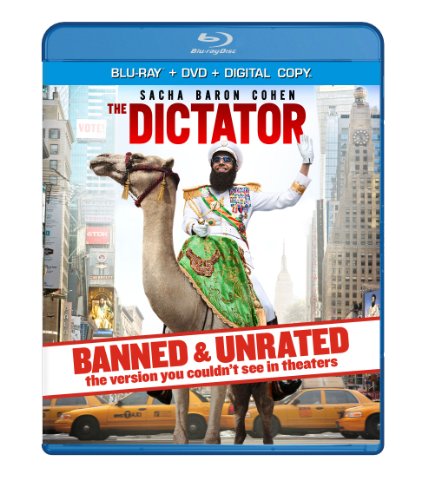 , reigning supreme in an all-new Banned* & Unrated version debuting August 21, 2012 on Blu-ray with a Digital Copy, DVD (both with UltraViolet (TM)), On Demand and for Digital Download from Paramount Home Media Distribution.

The hysterical tale of an inept despot's first trip to America, The Dictator

"starts at outrageous and rockets on from there" (Peter Travers, Rolling Stone) as the leader of Wadiya is stripped of power and suddenly forced to live his ultimate nightmare...the American dream. The Dictator

"My film is funnier than equal rights for women, as gut-busting as a UN resolution and more hilarious than watching a student set himself on fire. Owning a copy of my glorious and award-winning** film will give you more pleasure than having Halle Berry rub almond oil into your buttocks while you stimulate her bint al-sahn with your mashloof...and it will cost you considerably less money," said Admiral General Aladeen. "Although my film was subjected to the infamous authoritarian censorship of the West, thanks to Blu-ray and DVD you can finally see all the really naughty bits. I have your home address, so trust me, you WILL love it."

will be available in a Blu-ray/DVD combo that includes both an unrated version of the film with nearly 20 minutes of footage not seen in theaters, as well as the original theatrical version. The set also includes over 30 minutes of hilarious deleted and extended scenes, a Larry King interview with Admiral General Aladeen, a Digital Copy and more. A single disc DVD will also include the unrated version and the original theatrical version, as well as select deleted scenes and more.

All Blu-ray and DVD releases available for purchase will be enabled with UltraViolet, a new way to collect, access and enjoy movies. With UltraViolet, consumers can add movies to their digital collection in the cloud, and then stream or download them - reliably and securely - to a variety of devices.
* Original theatrical version banned in Malaysia and the Republics of Kazakhstan, Tajikistan and Turkmenistan