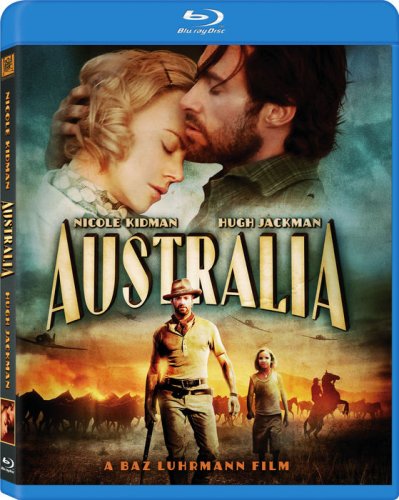 Baz Luhrmann's Australia is all spectacle, screaming "epic movie" from frantic opening montage to soaring, melodramatic finale. Overstuffed? Hokey? Sure. But never a dull moment even in this, the most restrained of the down under director's oeuvre (which is like saying it's the least garish neon shade).

Any thought that Baz Luhrmann had retired his candy-colored, caffeine-charged aesthetic after wrapping his increasingly hyperkinetic "Red Curtain Trilogy" is quickly put out of mind in the opening moments of Australia, an ode to the land down under that struggles to get a grip on the whole of the continent's history, beauty, triumphs, and tribulations, but above all strives to be cinematic with a capital "c" (and perhaps an exclamation point). It might as well be called Australia: The Movie.

In the grand tradition of epic filmmaking, Australia is two movies long with three movies worth of plot. We open in 1939 on Lady Sarah Ashley (Nicole Kidman), a proper Englishwoman who has traveled to Australia to force her no-account husband to sell his cattle ranch, Faraway Downs. She arrives to find her husband murdered, and the ranch under the control of his manager, Neil Fletcher (David Wenham), who tells Sarah her husband was killed by a local Aboriginal tribesman known as King George (David Gulpilil, who starred as a teen in Nicholas Roeg's Walkabout). From his first appearance, Fletcher is so obviously the villain that the movie wastes no time in showing him 1) conspiring with a powerful cattle baron to monopolize the beef trade in the Northern Territory and 2) abusing an adorably feisty young boy, Nullah (Brandon Walters), a 'creamy'óhalf white and half Aborigineówho reveals Fletcher's treachery to Lady Sarah.

Sarah decides to fire Fletcher and try to run the ranch herself, but after problems with the animals and a run-in with the white authorities who try to take Nullah away from his family (and incident that leaves his mother dead), she seeks the assistance of local cattle legend The Drover (Hugh Jackman) to move the herd to the port city of Darwin and sell them, a mission that invites more treachery from Fletcher and his men. The Drover rounds up a band of amusing character actors to assist in the drive, which through convoluted circumstances comes to include both Lady Sarah, who sheds her aristocratic ways even as her feelings toward the gruff Drover soften, and Nullah, who begins to exhibit the same magical connection with the land as King George, who begins to pressure the boy to go on a walkabout of his own.

It sounds like enough for one movieóheck, it was enough for Red Riveróbut Australia is just getting started. The cattle drive is a thrilling sequence, full of action and drama, but once it ends, we've still got a full movie to go, and it becomes clear that Luhrmann has loftier goals in mind. With the cattle drive complete, years pass, love between Sarah and the Drover blossoms and the movie turns its attention to Nullah and the prejudice an entire generation of mixed-race children faced in Australia, when they were routinely taken from their families by government and religious organizations and sent away to "have the black bred out of them" (according to the movie at least; as with more instances of racial discrimination, historical interpretations and "official" explanations vary). Even as the boy runs afoul of these groups (thanks in no small part to the vile Fletcher), Japanese bombers set their sites on Darwin and circumstances threaten to tear Sarah and the Drover apart.

Rapidly shifting from romantic adventure to social commentary and war melodrama, Australia is a schizophrenic picture that somehow manages to remain entertaining. Despite the director's stated intent to explore a new style, the movie is as comfortable with artifice as 1992's Strictly Ballroom, 1997's Romeo + Juliet, and 2001's Moulin Rouge! (which really earned that exclamation point). It's been a long time since his last movie, and Luhrmann seems to shake loose his old standbysófrantic editing and cartoonish actingówith a frantic, grating opening montage before settling into a much more relaxed rhythm than ever before, if no less make-believe. The inspiration is clearly Hollywood's Golden Age as it lives in memoryólarger than life, full of melodrama, beautiful stars, iconic heroes, and Technicolor vistas drenched in color and detail (heck, at one point they even sit down for a premiere screening of The Wizard of Oz. It's a "movie movie," so much so that Jackman's loveable scoundrel hero doesn't even need a nameóeven after years of marriage, Sarah still just calls him "Drover," because additional shading is unnecessary. If not quite spectacular, it's at least a triumph of spectacle and a respectable recreation of the kind of movie they used to make.

The DVD: Blu-ray is the way to see Australia, which like it or not was one of 2008's most splendid visual pleasures. The 2.35:1 transfer is beautiful, with a gorgeous color palette that emulates Technicolor epics of old. The lossless DTS 5.1 audio mix matches the image, with a wide front soundstage and strong use of the surrounds during action sequences. LFE positively thunders during the cattle stampede, which dialogue is well mixed throughout, as is the stirring score.

The DVD didn't include any extras, and while what's here isn't in-depth, it's better than nothing. THe bonus material is divided into a number of short HD featurettes. Australia: The People, the History, the Location (07m:01s) is a fluffy "historical" look at the locations, while the nine-part Behind the Scenes runs a collected 1h:16m and covers pretty much the entire production with sections on photography, production design, costume design, locations, cinematography, sound, editing, music, and visual effects.