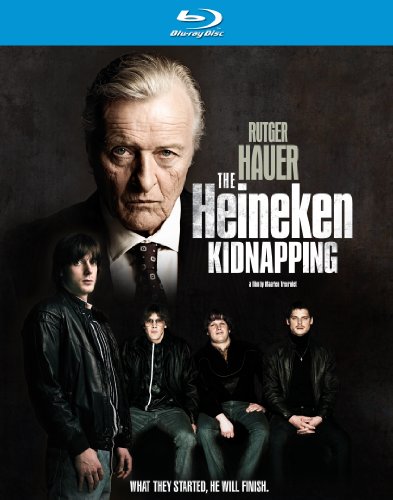 Yes, folks, even seemingly ageless actors like Rutger Hauer get older, but he seems to be aging gracefully, leading up this fictionalized version of the most publicized abduction to ever occur in the Netherlands.

Filmmakers always walk a fine line when they choose to put a true story on film. Much of this risk stems from the nearly inevitable altering of the true story that’s necessary to fit what often takes place over a large chunk of “real time” into the confines of a feature film’s run time. Such a conundrum was clearly faced by Dutch filmmaker Maarten Treurniet when he took to shooting The Heineken Kidnapping, an account of a true story that attempts to double as a high-tension action/thriller that has apparently taken at least a few liberties with what really happened in The Netherlands back in 1983. The end result is sure to please fans of such films, despite some rough patches, but Rutger Hauer’s excellent performance is sure to at least have his fans checking out MPI Home Video’s new Blu-ray disc of The Heineken Kidnapping.

The best that can be said about The Heineken Kidnapping is that it is a prime showcase for the great Rutger Hauer. He actually enjoyed a bit of career resurgence over the last couple of years, thanks, in large part to a starring role in the 2011 B-movie, “Grindhouse”-esque film, Hobo with a Shotgun. The Heineken Kidnapping is also from 2011, and is the polar opposite of Hobo, beginning with the films’ vastly different material, and ending with the fact that this is a Dutch-language movie featuring Hauer portraying a real person. Hauer’s performance in Heineken is also the thing that Oscar nominations are made of; it’s just too bad that the film itself has received so little recognition, that he has no chance at garnering such accolades.

The film, as a whole, is your typical docudrama, focusing on the events surrounding the actual kidnapping of Alfred “Freddie” Heineken (yes, the beer guy) by a gang of hoods that includes Rem (Reinout Scholten van Aschat), who might be more than he seems. The problem is that once the initial part of the titular event occurs, there’s a pretty long period of time before anything worth watching happens. At least a half hour could easily have been shaved off of the total running time, and this lone, glaring flaw, turns out to be the film’s downfall. Still, it’s well-worth taking a look at once, if only for Hauer’s stellar work and continued road back to acting prominence.

MPI’s Blu-ray disc features a 1080p video transfer presented in the film’s original 2.35:1 widescreen aspect ratio. Everything looks great throughout, thanks to deep black levels, well-rendered colors, and only a couple of flaws that never do much to detract from the visual experience. The Dutch DTS-HD Master Audio 5.1 track is a very lively one, making extensive use of the surrounds, incorporating directional effects and thundering bass quite often. Dialogue is always crisp and wonderfully blends with the rest of the mix. The only supplemental features are a 20- minute behind the scenes piece and a trailer for The Heineken Kidnapping.