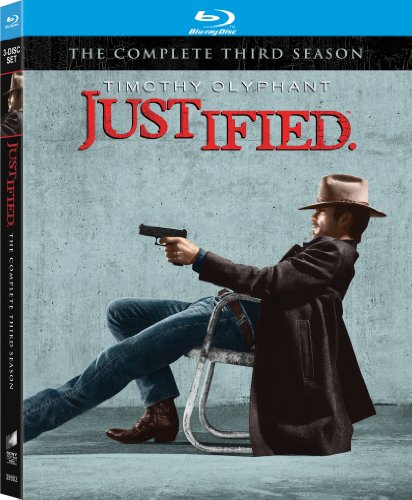 CULVER CITY, CALIF. (October 29, 2012) - The renegade style of justice is back when Justified: The Complete Third Season

The third season of Justified

Arriving on Blu-ray and DVD, the three-disc set comes with all 13 episodes, deleted scenes, outtakes, cast and crew commentary on nine episodes, and three all-new featurettes that focus on the making of season three, the stunts and a tour of Nobles Holler. Exclusive to the Blu-ray is a sit down interview between Olyphant and Goggins.

SYNOPSIS
Boyd and his crew will find they aren't the only ones making a play to rule the Harlan underworld. Now Raylan finds himself facing off against dirty politicians, hidden fortunes, a mysterious man named Limehouse
and an enterprising and lethal criminal from the Motor City named Quarles.

has a run time of approximately 541 minutes and is not rated.

Emmy(R) is the registered trademark of the ATAS/NATAS.