Fan favorite Martin Clunes is back as the surly, self-centered Dr. Martin Ellingham. In the sixth series, the doctor tackles fatherhood, his complicated relationship with local teacher Louisa (Caroline Catz), and the return of his mother (Claire Bloom).

Highly anticipated new season of the #1 British dramedy;
Features more than an hour of behind-the-scenes segments 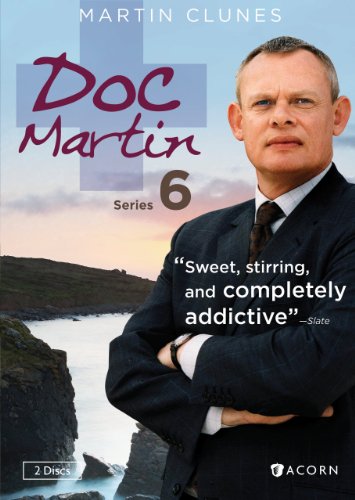 debuting on DVD on December 10, 2013 from Acorn, an RLJ Entertainment, Inc. (NASDAQ: RLJE) brand. Doc Martin is the #1 show for many public TV stations, and the previous season was Acorn's top-selling DVD of 2012. In the U.K., Doc Martin is ITV's highest-rated drama series with more than 10 million viewers, and the series has been licensed in more than 70 countries with amusing localized versions. Fan favorite Martin Clunes (Men Behaving Badly) is back as the surly, self-centered Dr. Martin Ellingham. In the sixth series, the doctor tackles fatherhood, his complicated relationship with local teacher Louisa (Caroline Catz, Murder in Suburbia), and the return of his mother (Claire Bloom, Brideshead Revisited). The series co-stars Emmy(R) winner Eileen Atkins (Cranford, co-creator of Upstairs, Downstairs), Ian McNeice (Doctor Who) and Joe Absolom (Hatfields & McCoys). The DVD 2-disc set includes eight episodes, plus 64-minutes of behind-the-scenes segments ($39.99, AcornOnline.com). Series 6

aired in the U.K. on ITV in Sept. 2013, and Acorn.TV streamed the exclusive U.S. premiere in Oct. 2013. Through American Public Television, Series 6 will begin airing on public television in February 2014.

Even on his own wedding day, Dr. Martin Ellingham (Martin Clunes) is all scowls. Then following a calamitous honeymoon, he and Louisa (Caroline Catz) must learn to live together, raise a child, and manage two careers. It's a big adjustment for both, especially Martin, who's unaccustomed to clutter and noise. And yet he's still not as picky as their OCD nanny.

Factor in the Doc's usual string of batty patients--including a hypochondriac, a hoarder, two elderly tattoo artists, and a bumbling constable with a string of self-inflicted injuries--and Martin is soon more ill-tempered than ever. Plus, his crippling blood phobia is back, and his ghastly mother (Claire Bloom) picks a bad time to show up at the Ellinghams' door. With much at stake, Martin turns for advice to his aunt Ruth (Eileen Atkins) perhaps the sanest person in Portwenn--but it may already be too late.

Filmed in the idyllic Cornwall village of Port Isaac, Doc Martin won the Best TV Comedy Drama at the British Comedy Awards. The series premiered on ITV in the U.K. in 2004 and has aired for six series. Acorn previously released Doc Martin, Series 1 - 5 in individual sets and a Doc Martin Special Collection (Series 1-5 + The Movies). To learn more about Doc Martin, please visit www.docmartinfan.com

Acorn's and Athena's DVD sets are available from select retailers, catalog companies, and direct from RLJ Entertainment at (888) 870-8047 or AcornOnline.com. Select series are streaming at Acorn TV, the first British TV-focused streaming service, at www.Acorn.TV