In the hot and deadly summer of 1964, the nation could not turn away from Mississippi. Over 10 memorable weeks known as Freedom Summer, more than 700 student volunteers joined with organizers and local African Americans in a historic effort to shatter the foundations of white supremacy in one of the nation's most segregated states. Working together, they canvassed for voter registration, created Freedom Schools and established the Mississippi Freedom Democratic Party with the goal of challenging the segregationist state Democratic Party at the national convention in Atlantic City. 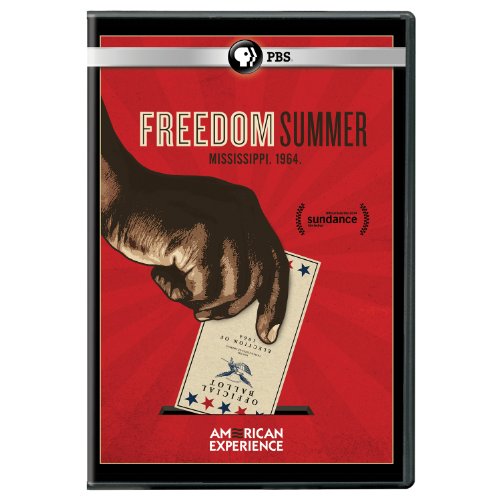 on DVD. In the hot and deadly summer of 1964, the nation could not turn away from Mississippi. Over 10 memorable weeks known as Freedom Summer, more than 700 student volunteers joined with organizers and local African Americans in a historic effort to shatter the foundations of white supremacy in one of the nation's most segregated states. Working together, they canvassed for voter registration, created Freedom Schools and established the Mississippi Freedom Democratic Party with the goal of challenging the segregationist state Democratic Party at the national convention in Atlantic City. Freedom Summer was marked by sustained and deadly violence, including the notorious murders of three civil rights workers, countless beatings, the burning of 35 churches and the bombing of 70 homes and community centers.

highlights an overlooked but essential element of the civil rights movement: the patient and long-term efforts by outside activists and local citizens in Mississippi to organize communities and register black voters - even in the face of intimidation, physical violence and death. "The Freedom Summer story reminds us that the movement that ended segregation was far more complex than most of us know," said AMERICAN EXPERIENCE Executive Producer Mark Samels.

will be available on DVD June 24, 2014. The run time of this program is approximately 120 minutes. The DVD SRP is $24.99. The program will also be available for digital download.

In 1964, fewer than 7 percent of Mississippi's African Americans were registered to vote, compared to between 50 and 70 percent in other southern states. In many rural counties, African Americans made up the majority of the population, and the segregationist white establishment was prepared to use any means necessary to keep them away from the polls and out of elected office. As Mississippian William Winter recalls, "A lot of white people thought that African Americans in the South would literally take over and white people would have to move, would have to get out of the state."

For years, local civil rights workers had tried unsuccessfully to increase voter registration amongst African Americans. Those who wished to vote had to face the local registrar, an all-powerful white functionary who would often publish their names in the paper and pass the word on to their employers and bankers. And if loss of jobs and the threat of violence wasn't enough to dissuade them, the complex and arcane testing policies were certain to keep them off the rolls.

In 1964, a new plan was hatched by Bob Moses, a local secretary for the Student Nonviolent Coordinating Committee (SNCC). For 10 weeks, white students from the North would join activists on the ground for a massive effort that would do what had been impossible so far: force the media and the country to take notice of the shocking violence and massive injustice taking place in Mississippi.

Word of the coming influx spread, and Mississippi officials geared up for the newcomers by increasing police forces, passing new ordinances and purchasing riot gear and weapons. Meanwhile, Mississippi Summer Project (later known as Freedom Summer) students gathered on the campus of Oberlin University in Oxford, Ohio, to meet with SNCC leaders for training. After the first week, the volunteers learned that three members of their group - Mickey Schwerner, Andrew Goodman and James Chaney - had gone missing in Mississippi. As the days passed and the young men were not heard from, people began to fear the worst - that they'd been murdered by the Klan.

Undaunted, the Freedom Summer volunteers went down to Mississippi, fanning out across the state, embedding themselves with local families and setting up Freedom Schools where children were taught African-American history and culture - subjects forbidden in their regular public schools.

On August 4, 1964, the bodies of the three missing men were finally found, buried beneath an earthen dam. Despite the brutal murders, volunteers and locals were more committed to their cause than ever. Attention was focused on signing people up for the Mississippi Freedom Democratic Party, which planned to challenge the all-white Mississippi delegation at the upcoming Democratic National Convention in Atlantic City. Delegates included Fannie Lou Hamer, a former sharecropper who had been beaten while trying to register to vote and who had emerged as an authentic and passionate spokeswoman. At the convention, Hamer's speech moved the crowd, but proved no match for the Johnson machine, which feared that the upheaval would threaten his candidacy.

As activist Charles McLaurin remarks in the film, "I felt really bad that we had not unseated the Mississippi delegation. But Fannie Lou and I came home with the feeling that our mission had not ended. We were coming home to continue to fight for the right to vote. We were charged because we had stuff back here to do." A year later, Congress finally passed the Voting Rights Act of 1965.

The events of Freedom Summer have long been overshadowed by the more large-scale public events of the civil rights movement such as the events in Birmingham, Selma and the March on Washington. Freedom Summer

, told by the brave people who lived it, restores their story to its rightful place in America's history. Says filmmaker Stanley Nelson, "Nearly 50 years later, we are seeing challenges and rollbacks to the protections that were put into place following Freedom Summer. The Voting Rights Act of 1965 solidified the importance of the basic civil rights that organizers, volunteers and Mississippians were fighting for, and so I think it is incredibly valuable to watch and learn about that summer. It's still a relevant fight today."

American Experience is a production of WGBH Boston

Stanley Nelson (Producer/Director/Writer) is an award-winning documentary filmmaker, MacArthur "genius" Fellow and member of the Academy of Motion Picture Art & Sciences. Nelson is the director of 12 documentary features, including Freedom Riders, Jonestown: The Life and Death of People's Temple and The Murder of Emmett Till. He is also co-founder and executive director of Firelight Media, which provides technical education and professional support to emerging documentarians. With seven of his films having premiered at the Sundance Film Festival and multiple industry awards to his credit, Nelson is acknowledged as one of the premiere documentary filmmakers working today. Nelson is currently in production on The Black Panthers: Seize the Time, which is the first in a series of three films Nelson will direct as part of a new multi-platform PBS series entitled America Revisited.

Mark Samels (Executive Producer) was named executive producer of American Experience, PBS' flagship history series, in 2003. Under Samels' leadership, the series has been honored with nearly every industry award, including the Peabody, Primetime Emmys, the duPont-Columbia Journalism Award, Writers Guild Awards, Oscar nominations and Sundance Film Festival Audience and Grand Jury Awards. Samels served on the Board of Governors at the Academy of Television Arts and Sciences. Prior to joining WGBH, Samels worked as an independent documentary filmmaker, an executive producer for several U.S. public television stations and as a producer for the first co-production between Japanese and American television. A native of Wisconsin, he is a graduate of the University of Wisconsin-Madison.

About AMERICAN EXPERIENCE
Television's most-watched history series, American Experience celebrated its 25th anniversary in 2013. The series has been hailed as "peerless" (The Wall Street Journal), "the most consistently enriching program on television" (Chicago Tribune) and "a beacon of intelligence and purpose" (Houston Chronicle). On air and online, the series brings to life the incredible characters and epic stories that have shaped America's past and present. Acclaimed by viewers and critics alike, American Experience documentaries have been honored with every major broadcast award, including 30 Emmy Awards, four duPont-Columbia Awards, and 16 George Foster Peabody Awards, one most recently for the series represented by Freedom Riders, Triangle Fire and Stonewall Uprising.