Daniel and his family love spending time outside in their neighborhood: going for walks, playing with friends such as Katerina Kittycat and Prince Wednesday, and enjoying the world around them. In the grr-ific stories included on this DVD, Daniel learns about safety at the beach and visits the Enchanted Garden to pick strawberries. And when a windstorm makes a mess of the neighborhood playground, Daniel and his friends and neighbors work together to clean up and make it ready for play again.

Available on DVD from PBS Distribution May 26 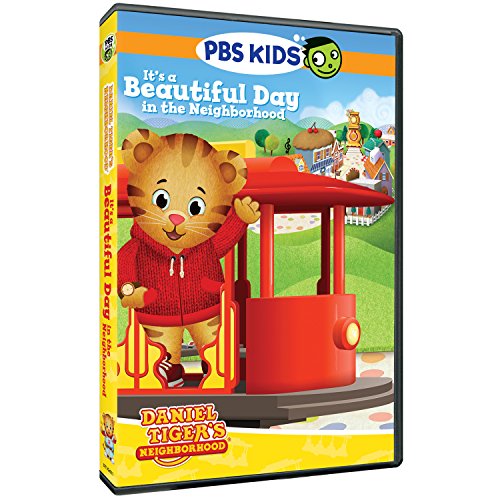 " Daniel and his family love spending time outside in their neighborhood: going for walks, playing with friends such as Katerina Kittycat and Prince Wednesday, and enjoying the world around them. In the grr-ific stories included on this DVD, Daniel learns about safety at the beach and visits the Enchanted Garden to pick strawberries. And when a windstorm makes a mess of the neighborhood playground, Daniel and his friends and neighbors work together to clean up and make it ready for play again. With warmer weather fast approaching, It's a Beautiful Day in the Neighborhood

is a great way to get kids excited about getting outside and exploring their neighborhood.

stars 4-year-old Daniel Tiger, son of the original program's Daniel Striped Tiger, who invites young viewers into his world, giving them a kid's-eye view of his life. As they closely follow and share Daniel's everyday adventures, preschoolers ages 2-4 and their families learn the fun and practical strategies and skills necessary for growing and learning. One of the key ingredients that sets the series apart is its groundbreaking use of catchy, musical strategies that reinforce each theme and that preschoolers and parents both sing – and use – together in their daily lives. DANIEL TIGER'S NEIGHBORHOOD, which debuted in September 2012, airs daily on PBS KIDS (check local listings). Angela C. Santomero of Out of the Blue Enterprises, Kevin Morrison of The Fred Rogers Company, and Vince Commisso of 9 Story Entertainment are the program's executive producers.

It's a Beautiful Day in the Neighborhood

The It's a Beautiful Day in the Neighborhood

It's a beautiful day in the Neighborhood! Daniel and his family are spending the day outside exploring, when Daniel spots a beautiful red bird. As they watch the busy bird, they learn about how a bird's nest is built. But when the nest falls out of the tree, will Daniel and Katerina be able to help?

There's so much to explore when you're outside! Daniel is going on a nature walk in the forest with O the Owl and Uncle X. They see frogs, worms and even spot a rainbow in the sky!

"Safety at the Beach"

Daniel and Katerina are playing on Jungle Beach with Mom Tiger. The children get a bit carried away by their treasure hunting play and they drift too far away from Mom. They learn that to stay safe near the water, they need to stop and listen!

A wind storm has made a mess of the Neighborhood playground and no one can play. When King Friday proclaims that it is Clean Up Day, everyone helps restore the playground by throwing out and recycling the trash. The children learn that by working together, the playground can be ready for play again in no time!

Daniel and his friends are enjoying a Fruit Festival in the Enchanted Garden. Prince Wednesday grows upset because his big brother Prince Tuesday can pick the highest fruit off the tree branches, but he can't. He wishes he wasn't so little! Then, when the festival-goers spot a very special magical golden pear on the ground, Prince Wednesday is the only one little enough to reach it.

"A Trip to the Enchanted Garden"

The Tiger family is making strawberry pancakes for breakfast this morning, but when Mom looks more closely in the kitchen, she realizes there are no more strawberries left. They all head to the Enchanted Garden, where Mom Tiger shows Daniel the strawberry patch. Daniel is very curious, and learns that if he looks closely, he may be able to answer his own questions about how strawberries grow and learn something new.

Daniel, Miss Elaina and Prince Wednesday are at the park with Prince Tuesday. They decide to play a game with a ball. Daniel struggles to catch the ball and gets very frustrated. All of his friends remind him to keep on trying and finally, he succeeds!

Daniel and Prince Wednesday are making sand pies in the sandbox. They decide to top off a sand pie with Prince Tuesday's royal crown, but they soon see that this wasn't such a good idea. They learn how to apologize to Prince Tuesday and make the situation better – by helping clean the crown and promising to ask first next time.

About The Fred Rogers Company
The company was founded by Fred Rogers in 1971 as the non-profit producer of Mister Rogers' Neighborhood for PBS. In the years that followed, it not only created hundreds of episodes of this much-loved program, but also extended Fred's values and approach to other efforts in promoting children's social, emotional and behavioral health and supporting parents, caregivers, teachers and other professionals in their work with children. The Fred Rogers Company continues to build on Fred's legacy in innovative ways through a wide variety of media, and engaging new generations of children and families with his timeless wisdom. The company's highly-rated, award-winning children's series include Daniel Tiger's Neighborhood, Peg + Cat and Odd Squad. For more information, visit www.fredrogers.org.

About Out of the Blue Enterprises

Out of the Blue Enterprises is a leader in children's educational media, with a portfolio of breakthrough, interactive and curriculum-based entertainment concepts that span a variety of viable platforms, including television, video, mobile apps and consumer products. Out of the Blue's properties include Super WHY, the hit Emmy-nominated literacy series on PBS KIDS; Creative Galaxy, a new interactive art series for Amazon Studios; Daniel Tiger's Neighborhood, the animated series inspired by Mister Rogers' Neighborhood; Nickelodeon's Blue's Room; and the Colorforms Brand. In addition, Out of the Blue also handles all licensing and merchandising activity for Super WHY and Daniel Tiger's Neighborhood. The company also develops top-rated mobile educational game apps, including Super WHY, Chuggington: Terrific Trainee, and Colorforms: Revolution. Led by Co-Founders Angela C. Santomero, Creator of the hit preschool entertainment franchise, Blue's Clues; and Samantha Freeman, a former Nickelodeon and toy industry executive, Out of the Blue aims to engage kids and families with age-appropriate, entertaining, and engaging learning experiences.

PBS Distribution offers a diverse range of programming to our customers, including Ken Burns's films, documentaries from award-winning series such as NOVA, FRONTLINE, AMERICAN MASTERS, NATURE, and AMERICAN EXPERIENCE, dramas from MASTERPIECE, as well as films from independent producers and popular children's programming. PBS Distribution offers consumers high-quality content in multiple formats including DVD, Blu-ray, digital download, and digital streaming, and is also a leading source for factual content for international broadcast, cable, and satellite services.