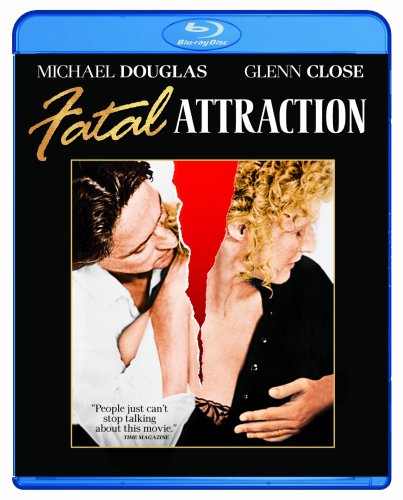 It kind of stinks that this flick is best known for a boiling bunny, as it is still an effective thriller doubling as a cautionary tale for all men.

It's interesting how filmmakers can create a project that inadvertently makes history. Fatal Attraction, for all intents and purposes, looked like your fairly average thriller when it came out in 1987. Nothing about it seemed particularly extraordinary, but it did indeed cause something of a revolution in the contemporary thriller genre. It introduced a certain style, attitude, and a definite, cautionary social message. In the late 1980s, when it seemed American culture was self-absorbed with overindulgence, Fatal Attraction was the metaphorical equivalent of Wile E. Coyote squashed by an anvil: an unintentional warning to men (and women) who had casual affairs. At the time, I wasn't old enough to appreciate this, so I observed this social phenomenon from the outside, as would any pre-teen. It wasn't until many years later that I first saw the film and truly understood its cultural impact as one of the ultimate "urban nightmare" films. It's amazingly adept in creating a situation in which any one of us may find ourselves, and then turns it upside down. Since its success, there have been numerous clones and films of similar style and setup, but virtually none of them have been anywhere near as clever and, in a sense, restrained as the original.

Michael Douglas portrays Dan Gallagher, a lawyer with a wife, a daughter, and a good life. One weekend, while his wife is out of town, he foolishly gets himself involved with Alex Forrest (Glenn Close), a woman whom he's met through work. Dan figures their affair will be a simple thing that can be quickly forgotten, but Alex will not let it go. Rather suddenly, she reveals a disturbed side of her personality; she obviously suffers from a number of psychological problems, not the least of which is an urge to control and "own" Dan's life. He does his best to stop her advances until she reveals to him that she's pregnant with his child, at which point Dan realizes things have gotten much more serious. Alex unleashes a campaign of slow, methodical terror on Dan and his family, and the intensity increases with every moment.

Ultimately, what makes Fatal Attraction so strikingly effective is the very careful technique in both writing and direction. Adrian Lyne's style fits the storyline like a glove, from his moody visual techniques to his amazing penchant for subtlety. Despite being a thriller with some fairly creepy moments, Lyne wisely holds back on the heavier style until it is absolutely needed. He manages to keep things balanced enough so that, even with Alex's emotional problems, this could believably happen anywhere to any family. The acting is also a crucial component. In similar thrillers where one member of a family is the center of a great conflict like this, the family is usually very meager in their supporting roles. Here, the casting of Anne Archer as Dan's wife results in an amazingly strong bond between the audience and her character; she's not just window-dressing (Look, Dan's got a wife!), she is important in conveying just how much Alex is upsetting the family order. Ellen Latzen was obviously cast as their young daughter because of her great charisma; she effectively fills the role of the most innocent victim, effective not just because she's cute or can lisp out a few lines to get viewer reactions. Glenn Close turns in one of her best career performances as someone who can be both sweet and charming, then ultimately disturbed. It's also worth mentioning that prior to this role, Close had never really played anyone particularly menacing or frightening, but she certainly proves her critics wrong here.

Again, just about every element in this film is very well calculated; even Maurice Jarre's musical score shows an amazing amount of care. He doesn't overload the scenes with loud, jarring stringsóuntil it's really deservedóbut rather moves in small, but powerful strokes, with his subtle piano pieces saying so much more. Fatal Attraction is slick and refined without really being obviously so, and that, to me, is a hard technique to get right because it has to feel earnest and come from the hearts of the filmmakers. Although, because of its age, the film is no longer quite as surprising and clever as it once seemed, it still stands as a classic piece on many levels. Stylistically, there are clever little touches here and there. For example, Dan's apartment and home is warm, cheery, and filled with a human touch. Alex's apartment, on the other hand, is devoid of any significant decoration, neo-retro in its artistic style, not to mention surrounded by the surreal imagery of the nearby meat storage houses, almost as if to suggest Dan is moving between worlds when he sees her.

Of course, the social aspect of the film is easily its most controversial, because many people took it as a serious commentary on casual relationships and even as a condemnation of single women who have affairs with married men, as if to say they're all deadly. I don't agree with that, though. I think the script cleverly touched some nerve that made people take it more personally than your average movie. I also don't believe that intelligent women like Glenn Close and Anne Archer would put so much effort into a film that was "obviously" supporting such a misogynist point of view. Fact is, these things can happen, and despite the ripping apart of every inch of potential symbolism in Fatal Attraction (and there is plenty), I think these charges are a case of over-analysis. It IS just a movie; the trick is, it's about something very, very, human.

Paramountís brand new Blu ray release showcases the film in an impressive 1080p, 1.78:1 widescreen presentation. At times, the film shows its age, but this transfer is full of sharp, detailed images and spot-on colors that make this a worthy upgrade for those of you with the previous standard DVD release. The audio is a lossless Dolby TrueHD 5.1 track, and, while itís not as impressive as the video, it does provide some nice depth and liberal use of directional effects during a few of the more suspenseful sequences. The dialogue is always strong, remaining crystal clear throughout. The extras collection is the same one found on the standard DVD, but itís nice having the much talked- about alternate ending and the original theatrical trailer available in HD for the first time.